The study of photoactive metal complexes has been extensive for the past 30 years.1 The first notable complexes studied were polypyridyl complexes of ruthenium and iridium;2 Ru(bpy)32+ exemplifies the typical photocatalyst. The photoredox properties of these metal complexes were primarily studied by inorganic and physical chemists for various application in inorganic and materials chemistry.3 These complexes have the unique properties, once photoexcited of being both more oxidizing and more reducing than their ground state species. Utilizing the remarkable ability of these complexes, redox transformations of the excited state can proceed either by oxidative or by reductive quenching, functioning as a reductant and an oxidant respectively. The reduction and oxidation ability of these complexes can be tuned using different ligands with electron-withdrawing or electron-donating groups.4 Among the first reports of the use of these complexes in catalysis in 1981, Pac and co-workers reported the use of Ru(bpy)32+ in the reduction of electron deficient olefins.5

Only a few publications came out for the next 25 years for the use of these complexes in organic reactions up until 2008. In 2008, MacMillan and his group reported one of the first catalytic reactions using a photoredox complex and organocatalysts for the asymmetric α-alkylation of aldehydes.6 The same year, Yoon and his group reported various [2+2] cycloadditions using Ru(bpy)32+.7 It was shortly followed by the publication of Stephenson and his group on the photoredox reductive dehalogenation of activated alkyl halides.8 These reports reinvigorated the interests in photocatalysis. Since then, the number of publications in this field increased exponentially. The versatility of these photoredox catalysts was demonstrated with a plethora of transformations such as the reduction of olefins, reductive dehalogenation, radical cyclization, trifluoromethylation, and functional group oxidation to name a few.9

Among some of the most interesting examples, the reductive dehalogenation of alkyl, alkenyl and aryl iodides developed by Stephenson and his group highlights the use of Ir(ppy)3 as a photocatalyst.10 Using 2.5 mol% of the photocatalyst with tributylamine and either Hantzsch ester or formic acid, a variety of alkenyl, alkyl, and aryl iodides underwent reductive dehalogenation in excellent yields. 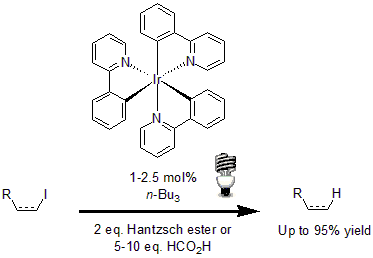 In another example of the utility of photocatalysts, Stephenson and co-workers reported tin-free radical cyclization reactions.11 Using 1 mol% of an Iridium based photocatalyst and triethylamine, a radical is generated by the reduction of an activated C-Br bond to yield the desired cyclized product of various alkenes and alkynes in good to excellent yields. 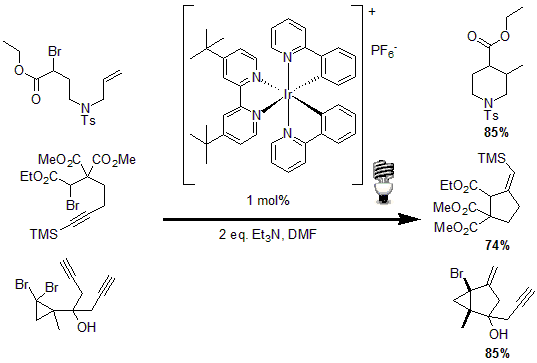 In 2011, MacMillan and coworkers, reported the first trifluoromethylation of arenes and heteroarenes via photoredox catalysis.12 Using 1 to 2 mol% of Ru(Phen)3 complex with CF3SO2Cl as the CF3 source and K2HPO4 as base, various heteroarenes as well as unactivated arenes were functionalized with a trifluoromethyl group in good to excellent yields. 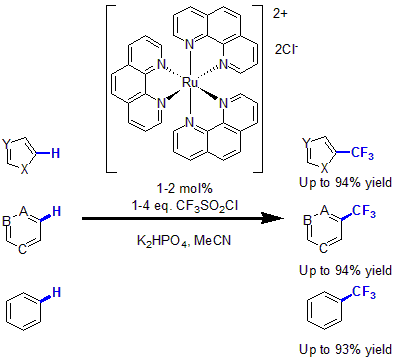 In 2011, Yoon and coworkers reported a new method for the [3+2] cycloaddition of aryl cyclopropyl ketones with olefins to yield highly substituted cyclopentane ring systems.13 Using 2.5 mol% of Ru(bpy)3Cl2 with La(OTf)3 as Lewis acid to activate the enone moiety, good to excellent yields were obtained of the desired cyclopentanes.

In 2012, Zheng and co-workers reported the visible light-mediated intermolecular [3+2] cycloaddition of cyclopropylamine with olefin.14 Using 2 mol% of Ru(bpz)3(PF6)2 as the photocatalyst, the method showed good regiocontrol in respect to the olefin, with a good tolerance of a variety of functional groups in good to excellent yields. 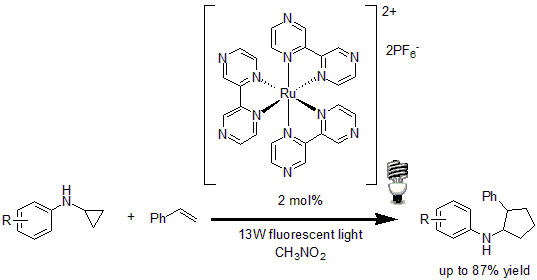 In 2011, Stephenson and coworkers developed a simple protocol for the intermolecular atom transfer radical addition to olefins. Using 1 mol% of [Ir(dF(CF3)ppy2(dtbbpy)]PF6 as the photoredox catalyst, a wide variety of halogenated compounds were coupled to terminal and disubstituted olefins in excellent yields.